The theme of my fellowship: timescapes and urban change, was inspired by my long term research on the neighbourhood of el Raval in Barcelona. 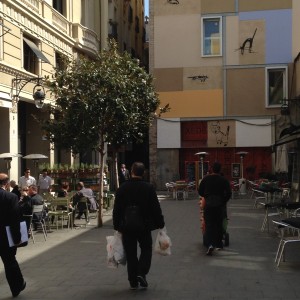 I was born in Barcelona and lived there till I was twenty years old. As my parents have continued to live there I’ve been able to follow the development of the city from an ‘outsiders’ perspective, being part of the culture yet also geographically distanced from it. Crossing el Raval with my mother to go to the Boqueria market was part of my experience growing up as a child in Barcelona. El Raval was then colloquially knows as ‘el barrio Chino’ Barcelona’s red light district, with some streets certainly lined with brothels, street-sexworkers and punters; yet also a lively working class neighbourhood with small businesses, shops and bars. It is situated right in the city centre, part of the Old City – Ciutat Vella.

El Raval grew within the medieval walls of the city of Barcelona, first as agricultural land, then with the advent of industrialization, the neighbourhood attracted in its the south-side large factories and cheap, insalubrious working class housing. It soon became one of the most densely lived neighbourhood in Europe. Nevertheless, some industrialists chose to settle in the bourgeois residences in the north of the neighbourhood next to religious institutions and hospitals. The old Roman road Carrer Hospital still divides nowadays the neighbourhood into two. With Barcelona’s expansion in the 19th century, industry moved out of el Raval into other areas. The leftover factory shells would soon be turned into precarious housing for waves of migrants from other areas of Spain. The neighbourhood’s working class and industrial character was accompanied by a booming sex and leisure industry at the start of the 20th century, catering for the upper classes, visitors and the poor alike. El Raval’s 24 hour bohemian and cosmopolitan feel became legendary and el Raval’s permissive character operated in opposition to the bourgeois Barcelona. This was further accentuated by the neighbourhoods anarchist and trade union activity. With the rise to power of Franco in the 1940s el Raval started a gradual decline as theatres, brothels and other leisure establishments were closed down and street soliciting increased. The entrance of hard drugs in the 1970s led to a rise of insecurity on its streets and el Raval became literally a ‘no-go’ area for much of Barcelona’s residents. 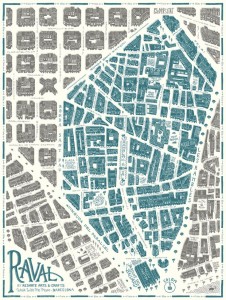 A map of the Raval by Reskate Studio 2016

As a newcomer to the city and unaware of the stigma and stereotypes that did surround this neighbourhood my German mother did not shun el Raval’s streets or people, guiding me along it. My most lively memory is looking up its narrow streets and being captured by the play of sunlight and shades in the green plants hanging from balconies while a constant murmur of voices emanated from open windows.

While I witnessed Barcelona’s city centre transforming from a rarely visited, grey environment in the 1980s to a colourful tourist attraction in the 1990s, supported by the famous slogan ‘Barcelona posat guapa’ (Barcelona make yourself beautiful) – el Raval seemed to stay untouched. Yet, after some time abroad and venturing into el Raval in 1995 I witnessed major building work transforming the neighbourhood. Not surprisingly, the regeneration consisted of designating this working class neighbourhood as Barcelona’s new ‘cultural quarter’ and thereby attracting to the northern area of el Raval a range of new cultural infrastructures such as museums, universities, research centres and other cultural institutions. It’s flagship development became Richard Meier’s Museum of Contemporary Art (Macba) which opened in 1995, a modernist white building situated on a vast minimalist square (a range of housing blocks had to be demolished to make space for the museum).

It was in 1997 that I started to think about the ways in which the regeneration processes were reshaping not just spatially the neighbourhood but more importantly experientially. I was fascinated by the stark contrast of the sensory features between the ‘old’ non regenerated areas of el Raval and the ‘new’ regenerated areas. As mentioned earlier, el Raval’s medieval and ad hoc spatial structure means that it is characterised by narrow streets, with balconies almost touching each other above, where one is quickly immersed in a sensuously intense, sometimes overwhelming, public life: negotiating narrow sidewalks with beeping mopeds and people; being assaulted by a cacophony of sounds: TV blaring, voices and hammering tools coming from shops and balconies; and being subjected to the musty smell of the sea mixed with sewage and urine sometimes or clean laundry and food at other times. The new ‘regenerated’ spaces on the other hand are less sensuously challenging. For example on the Placa dels Angels, in front of the Macba, due to its large scale, smells don’t linger as readily, sounds are muffled, tactility is minimised by its smooth surfaces. A hierarchical relations of the senses emerges 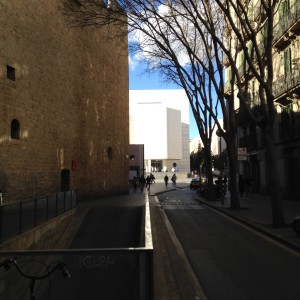 where the sensory rhythms of the place heighten the visual sense, whereas odours, sounds and tactile experiences become a supporting feature.

So, on first sight one could conclude that these new regenerated spaces stand in stark contrast to the rest of the neighbourhood. However, over the last 15 years I’ve had to concede that the story is not as straightforward. Firstly, the passing of time means that global changes have impacted on the regeneration processes of the neighbourhood. For example the financial crisis and Spain’s property bubbly in 2008 let many regeneration plans to a halt; or unexpected global migration patterns have made el Raval Barcelona’s most ethnically diverse neighbourhood with more the 50% of its residents not being Spanish. Secondly, when analysed over time one can witness that locals have appropriated many of the new spaces by immersing them gradually into the rhythms of the neighbourhood. Hence groups of skateboarders take over the ramps of the museum – their rattling rhythms mixing with the voices of Filipino youngsters and German tourists, while the homeless assemble their cardboard shelters in the cavities of the museum. Similar patterns happen in the other regenerated areas of el Raval, whether it is the Rambla del Raval which has become an important thoroughfare and green space in the dense neighbourhood or the highly contested Catalan Film Institute which opened in 2012 in the core prostitution area and symbolised ‘the end’ of a 20 year regeneration process and yet has not found its identity in this neighbourhood yet. That the regeneration of el Raval has not played out as expected by its enthusiastic planners nor its critics has led me to think about the role of time in urban planning and urban life. How are we to evaluate urban renewal when viewed as a long term-process and place making as a temporal practice?